The Alaloko fishpond wall has been described in detail many times over the years, often by people who apparently never actually inspected the wall itself.

It is a unique structure among Hawaiian fishponds, an inland pond wall structure that—for much of its length—combines an earthen berm with basalt boulders armoring on its outer river-side face, but not on the inner pond-side face. Kaua’i archaeologist William “Pila” Kikuchi in 1973 said it was the first brackish-water fishpond built in the Hawaiian Islands. He said it was alternately called Alakoko, Alekoko and Pēpēawa. . It is the largest fishpond on the island of Kaua’i, according to a 2012 report prepared by Angela I. Fa‘anunu, Margaret Magat, and Hallett H. Hammatt, of Cultural Surveys Hawaii.

In its combined mud and rock construction it is different from most known Hawaiian coastal pond walls. Those tend to be entirely made of large basalt boulders, or more commonly, basalt on both inner and outer walls, with an interior of porous `ili`ili, or small stones and pieces of coral. Below, from Kikuchi, 1973, is a cross-section view of a standard wall construction often used on the other islands, this one the Ali`i Fishpond on Molokai

But the Alakoko wall uses a technique related to one that is common on Kaua`i, where many Hawaiian old wall structures, whether for religious structures like heiau or for border walls, are constructed of earthen berms faced on the sides and top with basalt boulders. Some say that’s because there are fewer rocks and more soil on Kaua`i, which is geologically much older than the other islands.

Archaeologist Francis K.W. Ching in his 1973 “The Archaeology of Puna, Kaua’i,” reports that the entire wall is underlain or bordered by an older basalt wall on the river floor, which is between 13 and 20 feet wide. Here is his rendering of his assumed cross-section.

But it is not clear how Ching came to that assumed shape. He also envisions a wall that is earthen top to bottom, with a vertical rock wall on its river-facing side. Here are two of his views of that theoretical configuration:

What is clear from the surface is that the design in cross section changes, depending on where you are along the length of the wall. In the middle section, it has an earthen berm that is faced on the river side by a stone wall that is generally two boulders thick. But approaching the upstream or western end, the rock portion is only one rock thick. Ching measures the rock-faced portion at 1,764 feet in length. At the extreme western end, there appears to be no rock face; just a 435-foot earthen berm. That is also the case at the extreme eastern end, whose length depends on where you conclude the end is.

How long is the wall? Ching places the total wall length, confusingly at both 600 meters and 2,700 feet. Since 600 meters is no more than 1900 feet, that must be a typographical error. Fa’aunu, Magat and Hammatt put the wall at 825 meters, or about 2,560 feet. Mike Carson, in his 2005 paper, ‘Alekoko Fishpond, places the wall at 850 meters, or about 2,635. Bennett in 1931’s “Archaelogy of Kauai,” says “over 900 yards.” One common number used by others is 900 yards, which is the same as Ching’s 2,700 feet. But when a team from Mālama Hulē’ia informally measured, starting where the western wall disappears into swamp and running to its eastern terminus, they came up with less than 2,000 feet.

This is not to suggests all these professionals didn’t measure, but that it is difficult to decide where to measure. It is a challenge to designate the endpoints. In 2021, the western end of the wall seems to disappear into a swamp, while the eastern end connects to the walls of smaller ponds. Where does the Alakoko wall end and the next feature begin? That decision is up to the person doing the measuring.

Some tellers of tales have suggested that the Alakoko wall is made of cut stones, like those used in the prehistoric Kikiaola aqueduct at Waimea, Kaua’i. Alakoko and Kikiaola have long been connected in legend, and Kikuchi suggests they were built in the same time period by some of the same masons. The cut-stone Alakoko theory seems to come from people who have never looked at the wall, since there is no evidence of that.

Other writers have argued that the Alakoko wall is entirely made of basalt rocks, like many other fishponds, without an earthen core.

When Mālama Hulē’ia began the arduous work of removing the invasive, destructive mangrove overgrowth, whose roots were tearing apart the wall, certain small truths became evident. And as we suggested above, neither the cut-stone theory nor the all-rock theory holds water.

At no point is the wall entirely made of rock if viewed in cross-section. In fact, much of the wall is indeed earthen berm with no evidence of rock. Certainly the ends are entirely made of piled mud and sand. In the central portion, for some of its distance, the mud/sand berm is faced with lava rocks. Thus far in Mālama Hulē’ia’s work, none of those basalt rocks have shown evidence of shaping like the Kikiaola wall stones. All the rocks appear to be rough basalt stones, of a size appropriate for a human to carry.

Why is this particular fishpond wall so different from others?

Most Hawaiian pond walls were built on shallow reef flats, where builders could walk in knee or waist-deep seawater to set their stones. But parts of the Hulē’ia River nearby are 8-10 feet deep, although we don’t know how deep the river was in about 1400, when it was built. Almost certainly, builders would have had to work underwater. Were they lowering the first ranks of stones from canoes? Or perhaps were Hawaiian stonemasons walking on the river bottom, carrying basalt burdens as they held their breath? And after the fact, was this work of construction so heroic that storytellers invented the tale about magical Menehune doing the construction instead of their own inventive but human ancestors?

One thing that is clear in the appearance of the wall is that it has been touched by many hands, by people with different theories about construction, and with access to different materials. It is a living wall that has changed over time.

That bears out the known history, both from early Hawaiian legends and from the period after Western contact. Many of the early legends suggest that Hawaiians of the area started the wall, but were unable to finish. The legends say skilled craftsmen—some say they were Menehune spirit people from the forest—were called in to finish it. They would have had different construction methods. Also, during the 1800s and 1900s the pond wall was reconstructed at least twice, about 1900 and again after the 1946 tsunami. There would also have been repairs after other storms and wave events.

An 1890 photo attributed to Theodore P. Severin shows the wall in disrepair with its eastern end broken open.

A photo below dated at 1900 shows the breach repaired. The provenance of this photo is not known.

By 1912, the photo below shows that significant additional work had been done, adding new ponds at the eastern end of the wall. This photo by Ray Jerome Baker is courtesy of Bishop Museum.

So at a minimum, there are historical suggestions it was started by commoners of the region, completed by skilled masons, and rebuilt over the years by workers under early chiefs. Then in the more recent period, by Chinese farmer merchants who managed the pond from the late 1800s into the 1900s and by western operators in the 1940s. Each of them would have approached the pond challenge differently, and some, notably in the 1900 period, added features like two eastern ponds that may have been used as nurseries, harvest holding ponds, or for other aquaculture related purposes.

Ching suggests that the pond may have started its life as a fishtrap or pā, with a low wall whose top was between the low and high tides. That way fish would have traveled over the wall at high water, and would have been trapped inside at low water for easier catching. The subsequent traditional pond wall may have been built atop the pā wall, Ching says. But he also says it may simply have always been a regular enclosed pond, a loko kuapā.

The traditional Hawaiian makahā, or control gates, which would have been built of basalt stones and wooden lattices, are gone. They have been replaced by more modern concrete structures. Mālama Hulē’ia is aware of three makahā. One is midway down the length of the wall. One in the surviving north-south wall at the eastern end of the pond (visible on the lower horizontal wall in the photo above.) And the foundations of a third have been located, buried in sediment west of the previous makahā and visible in the photo above midway on the upper horizontal wall. The construction of the different makahā is different, so they may not all have been built at the same time by the same people. Mālama Hulē’ia has not yet established dates of construction.

There are reports that sheets of roofing iron were inserted into the mud along the interior side of the wall, and still visible in the 1970s.

Bags of concrete were used to make repairs after the 1946 tsunami. Some of those bags are still visible on the top of the wall today, in the area near the main pond wall makahā.

Archaeologists have done isolated test pits and have probed through the water and mud to try to find answers about the wall’s actual features, but their results were necessarily limited. Beneath the surface, lie mysteries yet to be revealed.

We hope to schedule community workdays again soon. Everyone, please be safe and healthy.

Check back with this site or email info@malamahuleia.org for future  activities and dates.

Get the Latest Posts Here

Support Malama Huleia with a Donation

For questions about MH activity, please contact us at: 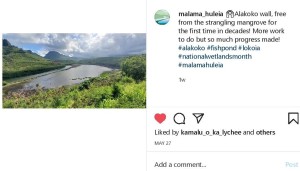 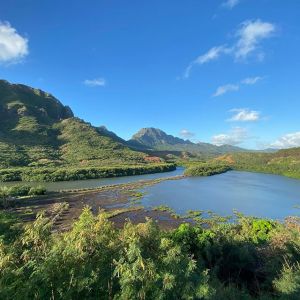 malama_huleia
Earth Day started as an environmental movement 50 years ago today. Before this COVID 19 pandemic set in we had the month of April’s calendar booked full of community volunteer days to work with us at Alakoko where we celebrate more than just Earth Day…we celebrate the AINA…everyday. We look forward to the day we can start having community groups gather and work with us again! Stay healthy and put your hands on the earth today!
#malamahuleia #alakoko #fishpond #earthday #alohaaina #aina #stayhome