NIUMALU, Kaua`i—For the first time in over half a century, The Alakoko Fishpond is clear of adult mangrove. This has been made possible thanks to an enormous effort by hundreds of community volunteers and contractors working with Mālama Hulē’ia. “We are so proud of the progress that has been made toward restoring the loko i`a,” said Malam Huleia’s executive director, Sara Bowen.

The outlines of the historic fishpond are now visible from the pond overlook, unobscured by the dense jungle of invasive mangrove that built up over the last 50 years.The 900-ft long fishpond wall is now fully visible along with several acres of open water and vast mudflats that now serve as nesting and feeding areas for native ducks, stilts, moorhens and herons.
“This is a huge milestone for our organization and our community. This ancient pond is a cultural icon for Kaua`i, and it has the potential to once again serve as a resource to support our island’s food supply resilience,” said organization board chairman Mason Chock.

The work on the historic pond is part of Mālama Hulē’ia’s goal to remove mangrove from the larger Hulē’ia River basin. The group’s first effort was the removal of mangrove fronting Niumalu Park, which was completed four years ago.

Much of the hand work has been done by community volunteers, including school outings and representatives of business and community groups. The monthly community work days have regularly brought dozens to the pond to clear weeds, cut and remove mangrove, and replant the cleared ground with native wetland species. Last year a group of volunteer machine operators cleared the first 10-acres of mangrove surrounding the fishpond. The remaining machine work was done with a specialized amphibious excavator made to do work in areas where a standard piece of equipment would sink into the mud. Transporting the amphibious excavator from the mainland was made possible through Matson’s generous contribution of donated shipping. “We are fortunate to have the opportunity to support Malama Huleia’s efforts to remove invasive mangroves from the Huleia National Wildlife Refuge and historic Alakoko fishpond,” said Patrick Ono, district manager, Kauai. “Matson is proud to be a part of the community effort to restore and protect this important cultural resource.”

Much of Mālama Hulē’ia’s work has been supported by grants from private and government funders. A U.S. Fish and Wildlife Service Coastal Wetland Restoration Grant is a major funding source, but so are private resources through individuals and the Hawai`i Community Foundation, and donations from numerous groups, including Matson.

Alakoko, also known as the Alekoko or Menehune Fishpond, is a 600-year-old structure that was one of the main food-producing resources of prehistoric East Kaua`i. It was in active use producing fish into the early years of the last century.

The 600-year-old earthen and stone fishpond wall has been damaged by the roots of invasive species, and Mālama Hulē’ia is working on a plan for wall repair. Meanwhile, there remains considerable work within the 40-acres surrounding and including the 25-acre fishpond, controlling mangrove seedlings, building up native plant inventory in a nursery and replanting cleared areas with native plant species.

The organization hopes to fully restore the pond to support the island’s food resilience, by producing aquatic resources that can help feed our community.

“There is still so much to do to bring Alakoko back into production, but also to continue our mission of restoring the native wetlands up and down the Hulē’ia. Many of our supporters have asked when they can get back to work on this important project. We are watching the development of our island’s COVID-19 response, and we hope to restart our community work days soon,” said Bowen. 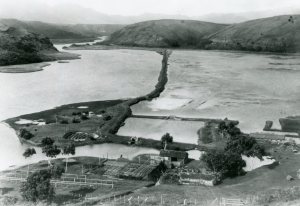 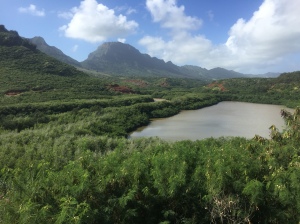 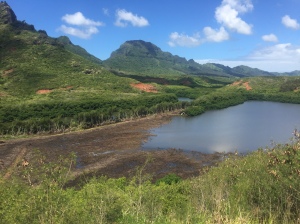 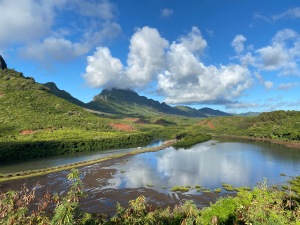 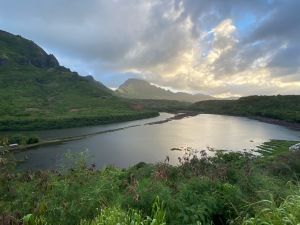